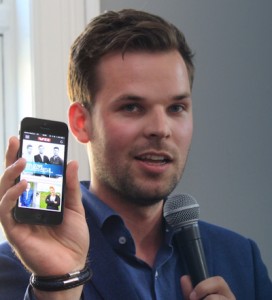 Unacast’s Thomas Walle Jensen
Beacons are expected to help drive more than $5 billion in annual domestic spending by 2019, and Norway’s Unacast is laying the groundwork for its proximity retargeting platform in the US as it seeks to both generate and capture those growing location-based ad revenues.

The company plans to open up a New York office within the next two months and has already struck partnerships with “a major shopping mall operator,” though Thomas Walle Jensen, Unacast’s CEO/co-founder, says the name remains under wraps at the moment.

But Walle Jensen says that the mall client reveal will come shortly. Things have been moving quickly since he and Kjartan Slette, Unacast’s co-founder/COO, started the company last September. The two met at Copenhagen Business School and have worked together on a number projects and companies since then, including the music streaming service Tidal that was acquired this past January by Jay Z.

From Tidal Waves To Beacon Waves

Walle Jensen and Slette were part of Tidal’s management team and in charge of the commercial arms: licensing, distribution, and strategy. While beacons and omnichannel retail marketing are very disparate concepts, solving the problem of connecting one source to many consumers via digital channels is the primary thread that runs through the duo’s collaborations.

Their goal now is to harmonize and align the proximity industry — much as they tried to do previously with the music industry.

“There are many more proximity beacon companies in the U.S.,” Walle Jensen says when asked about expanding so quickly to the US from Norway. “There are many more retail brands in the US that have adopted and started to think about the beacon strategy. What’s actually being done in Europe has been on a very, very low scale. Only with the most forward leaning retailers and brands.” 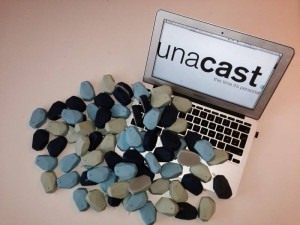 In a general sense, Unacast allows marketers to retarget consumers based on proximity data from beacon signals aimed at mobile devices’ Bluetooth receivers.

While the company is considering the growth of the beacon-like indoor messaging systems found in LED lighting displays, which connect via a smartphone’s camera, or IndoorAtlas’ magnetic positioning, which uses a device’s internal compass to map out a place’s pathways and walls, beacons are by far in the lead when it comes to in-store marketing. So that’s where Unacast will build its business.

Unlike a lot of companies that either provide the beacon hardware and software, or supply the marketing messaging that goes through those systems, Unacast has built and manages a global network of “proximity solution providers.”

Unacast takes the opt-in, offline data from beacons and allows retailer and brands to retarget consumer later, when the customer has left the store or venue, is at home, on travel or other places, based on the consumers interactions with beacons.

The goal is to be “the one backend, the one API, for all proximity,” so that all players in the ecosystem on both the supply side (proximity companies) and demand side (media and ad companies) can utilize harmonized and aligned proximity data, tagging structures and privacy through Unacast PROX network.

“For retailers and brands, it makes proximity data useable — and useful — by creating what is, in effect, the offline cookie,” a Unacast rep says. “You understand your customers better and it makes your online advertising more cost effective by being better targeted. For consumers it makes experiences more convenient, immersive, relevant and online advertising less ‘spammy.’” 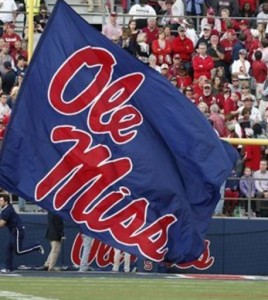 Matching the rapid growth of marketing dollars being tied to beacons and the ad spending going towards retargeting — digital marketing provider AdRoll has estimated that more than 71 percent of advertisers spend anywhere from 10-to-50 percent on retargeting — could be a compelling feature for brands looking to ramp up their omnichannel strategies.

“If you go one step back and look at 2014, that was all about a few retailers testing out beacons,” Walle Jensen says. “But most of the retailers that we speak to now are looking now at larger deployments. 2015 will definitely be the year where we see live commercial deployments out there, which actually creates a true marketplace.”

Shopping malls and airports have gotten a big head start, as have shopping malls. And that’s where Walle Jensen expects Unacast to concentrate more heavily.

While he declines to disclose most US clients at the moment, Walle Jensen notes that Unacast and its partner Total Communicator Solution are expanding a beacon network at “Ole Miss,” University of Mississippi’s football stadium, to include retargeting messages offering loyalty perks from brands.

The beacon solution that TCS has implemented at Ole Miss’ Vaught–Hemingway Stadium is pitched as a reward to college football fans for going to the games. Ultimately, Unacast’s beacon program will allow brands to send deals and discounts from marketers to people who have visited the stadium frequently.

“The program was set up to benefit the athletics department,” Walle Jensen says. “if a spectator visited the stadium two or three times during the season, then it makes sense to try to sell them season tickets.”

The new plan is create audience segments that can be retargeted with brands’ messages.

“This is a bit into the future, but this is precisely the role we want to take,” Walle Jensen says. “When a customer enters the stadium, they don’t want to send out the generic message to everyone. They want the right message to the right person — at the right time.”

As an example, let’s say a new pizza place opens up near the stadium. It would make sense to send an ad to only those people who have seen or clicked on the pizza shop’s “grand opening” ad when they’re in their seats during the third quarter of a game.

“Retargeting this way can show the value of proximity as a method to best understand the customers’ statistical journey between different venues and retailers,” Walle Jensen says. “It gives retailers and brands another reason to deploy beacons — not only to send personal notifications, but to use the data captured from other channels before the consumer even comes in contact with the beacon.”

This website uses cookies to improve your experience. We'll assume you're ok with this, but you can opt-out if you wish.

Any cookies that may not be particularly necessary for the website to function and is used specifically to collect user personal data via analytics, ads, other embedded contents are termed as non-necessary cookies. It is mandatory to procure user consent prior to running these cookies on your website.